By Dean BrentonOctober 9, 2009 No Comments

Ok I totally stole that line 🙂 It’s FRIDAY the start of YC…UNBELIEVABLE! 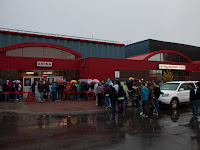 21 Then David returned to the brook Besor and met up with the 200 men who had been left behind because they were too exhausted to go with him. They went out to meet David and his men, and David greeted them joyfully. 22 But some evil troublemakers among David’s men said, “They didn’t go with us, so they can’t have any of the plunder we recovered. Give them their wives and children, and tell them to be gone.” 23 But David said, “No, my brothers! Don’t be selfish with what the Lord has given us. He has kept us safe and helped us defeat the band of raiders that attacked us. 24 Who will listen when you talk like this? We share and share alike—those who go to battle and those who guard the equipment.” 25 From then on David made this a decree and regulation for Israel, and it is still followed today
.

David is just back from the rescue mission and reclaims his family from the enemy after he soundly defeats them. On the way back he meets up with 200 men who hadn’t joined in the fight… See David’s attitude…he greeted them joyfully. CHALLENGE #1: Today lets be leaders marked by JOY! Let’s greet everyone we meet with PURE JOY. Let’s that be the first impression people have of YC today!

But the story goes on…some complainers arise in the church…now that’s a first 🙂 …they felt the men who didn’t enter the battle shouldn’t be recipients of any grace. See David’s response…”Don’t be selfish with what the Lord has given us…we share and share alike!” CHALLENGE #2: My final challenge to us all today is let’s not be petty or play into pettiness…like David let’s make GRACE THE NEW LAW! There’ll be lots of mistakes, frustrations, and little things to annoy us all but THIS DAY let’s allow “love to cover a multitude of sins!”.

I love you all. You are the best. PERIOD!

TODAY LET’S REJOICE IN THE VICTORY THAT HAS ALREADY BEEN WON!

For this generation…and ones yet to come.